Israel’s hottest problem: is co-existence possible between Jews and Arabs in Israel? 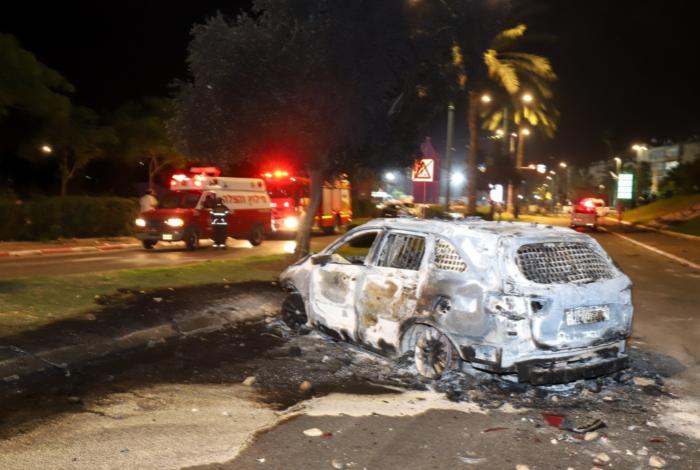 Israel’s last war with Gaza brought into a focus a problem considered even more of a threat to Israel than Hamas’ missiles – the threat of a potential rebellion from within by Israel’s own Arab citizens. Incited by Hamas, prior and during the war, Israeli Arabs decided to do their part by taking to the streets and rioting. In all the cities with substantial Arab populations where, till now, Jews and Arabs lived side by side – Acre, Haifa, Jaffa, Lod, Ramle to name the most important – the Arabs torched Jewish-owned stores, cars, synagogues, homes and wherever they could, beat up solitary Jews. In Lod, the riots were described as reminiscent of Kristallnacht (the 1938 pogrom in Germany when thousands of synagogues, Jewish homes and stores were ransacked by the Nazis).  In Jerusalem, the events took a different turn because Arabs and Jews are not integrated in Jerusalem and there is a clear demarcation line between the two populations: the Arabs live in East Jerusalem and the Jews on the Western side. When riots do take place, they are usually between the Arabs and the police and, indeed, it was the rioting in Jerusalem over a property dispute that set off the latest conflict with Hamas.

To gage the seriousness of the threat from within one only needs a little maths. Israel has a population of close to 9 million of whom almost 2 million are Israeli Arabs. The latter are not to be confused with the Palestinians living on the West Bank under the Palestinian Authority (PA) or with the Palestinians living in Gaza under Hamas. If incited further, these 2 million Arabs could constitute a very dangerous fifth column. Ironically, Israeli Arabs do not have much to complain about. They are full-fledged citizens of the State of Israel who enjoy freedom of religion, movement and speech. They represent a high percentage of students in all Israel’s universities and institutions of higher education and a high percentage of medical staff and patients in Israel’s hospitals; they hold top positions as heads of academic departments, heads of hospitals and sit as judges on Israel’s highest courts; they have their own political parties and are represented in Israel’s parliament – the Knesset. And, today, for the first time, an Israeli Arab political party, Raam, is part of the Israeli government and its leader, Mansour Abbas, holds a position of Deputy Minister.

This brings us to one of the calumnies constantly leveled against Israel and which Hamas helped to reinforce in its latest war. In addition to aiming to reclaim Jerusalem, Hamas declared war against Israel in order to fight against Israel’s “acts of ethnic cleansing and racist system of apartheid.”

Let’s look at this accusation of apartheid/ethnic cleansing closer. Yes, there is a difference in standard of living between Israeli Arab villages and Israeli cities but, at the same time, the cost of living in these villages is considerably lower than in the rest of the country and the standard of living of Israeli Arabs is much higher than in neighboring Arab countries or in the West Bank. And, yes, there are roadblocks and checkpoints between Israel and the Palestinian Authority on the West Bank – the reason stems not from any racist policy but from the fact that Palestinian terrorists from the West Bank have cost the lives of  hundreds of Israeli Jews (1,375 were murdered since 2000). These terrorist attacks are not just condoned by the PA, they are encouraged. In what’s called a “pay for slay” scheme, the PA rewards the terrorists and their families. It pays out millions of dollars in salaries to incarcerated or released terrorists and has a special “martyrs’ fund” for terrorists’ families. Just this month (June 2021), the PA authorized a payment of $42,000 to the family of a terrorist who killed 2 Israelis in 2015.

The accusation that Israel is an apartheid state is such a canard that it is hard to imagine anyone truly believes it. As journalist Caroline Glick remarks, those who level it know it’s not true: they use it simply because it is effective in furthering the goal of delegitimizing the very existence of a Jewish state. (Anyone wishing to understand the complexity of modern Israel should read Glick’s commentaries which can be found on carolineglick.com).

Ironically the only Middle Eastern country which still has a Jewish population is fanatically anti-Zionist Iran. After numbering nearly 100,000 pre-1948, Iran’s Jewish population has dwindled to   8,300. Tiny, but nevertheless, it is still the largest Jewish community in the Muslim world. To survive, its members have to toe the line, keep a low profile and never mention pro-Zionist sentiments. They are also prohibited from leaving the country!

Following the Arab rioting during the last war with Gaza, the hot question in Israel today is whether co-existence is possible between Arabs and Jews within Israel. To understand the problem, it is worth zeroing in on one of the cities that most epitomized the conflict. Lod, in central Israel, is a city with a low socio-economic population of 77,000, of whom a quarter are Arab. In the Ramat Eshkol  neighborhood Jewish and Arab residents live side by side, sharing the same apartment buildings, the same streets and the same facilities. Following the eruption of violence on Jerusalem’s Temple Mount, the Arabs began rioting in Lod. Neighbors who shared the same landing as Jews and were considered friends, rushed out to the streets to indicate to the rioters the apartments where Jews lived. Quoted in the Jerusalem Post, Rivi Abramovich, a 28 year old mother of two recounted her emotions that day: “People who I saw in the stairwell, people who helped me bring the groceries inside, my trust in them was damaged when I saw my neighbor go down and join the riots.”

The same picture repeated itself across the country. In Acre, where Jews and Arabs pride themselves on peaceful co-existence and on having worked together to beautifully restore Acre’s old city, the rioters returned again and again to burn down restaurants, stores and hotels.

Sadly, the pattern of friendly Arabs suddenly turning against their neighbors is not new. One of the most vivid accounts of Arab rioting against Jews – long before Israel was founded and long before the made-up accusations of apartheid or ethnic cleansing – can be found  in Albert Londres’ book The Wandering Jew Has Arrived (see link to book). Londres, a non-Jewish French journalist who was reporting from the Holyland in 1929, graphically described the Arab riots of that year in Hebron and Tzfat. This was when the Arabs numbered 700,000 in the Holyland and the Jews 130,000. Incited by their leaders (with the help of false rumors such as the Jews were distributing poisoned sweets to Muslim children), the Arab citizens turned on their neighbors with cut-throat virulence: in Hebron “…they cut off hands, they cut off fingers, they held heads over a stove, they gouged out eyes. A rabbi stood immobile, commending the souls of his Jews to God – they scalped him” (ibid p. 173); in Tzfat, an old man tells Londres that he was born in Tzfat and that they came to his house, killed his wife, and tried to kill him and that it was four of his neighbors whom he knew well (ibid. p. 176).

Arab hatred and violence against Jews was thus vibrant long before Israel ever existed, and has little to do with the return of so-called ‘occupied territories’ or the expansion of Jewish ‘settlements’.  It simply aims to destroy the Jewish state.  While liberal Israelis, even those whose businesses and homes were destroyed, talk of the need to rebuild trust and promote co-existence with the Arabs in Israel, Glick is more skeptical. “To put an end to the pogroms, Israel must end its tolerance for Arab Jew hatred. Israel’s future and the possibility that coexistence between Jews and Arabs will ever be restored, depend on our willingness to forthrightly demand that Arab Israelis abandon their hatred of this country” (Israel Hayom 14.5.2021).  This entails public acceptance of Israel as a Jewish state (which Israeli Arab political parties refuse to do), with the right of sovereignty over its territory.