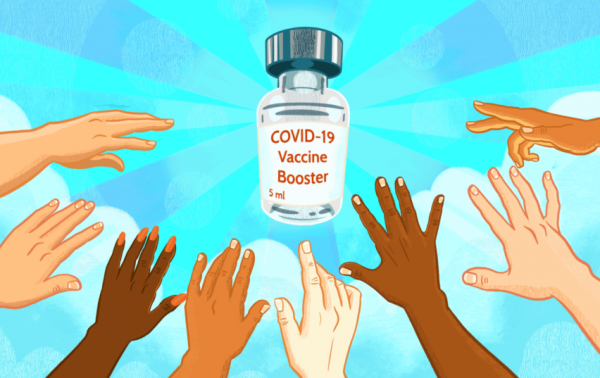 Many countries are making a third vaccine shot, called the “booster,” mandatory to being considered fully vaccinated and thus eligible to a vaccine pass – the pass that enables a person to participate in normal social life.

In Israel the green pass (vaccine pass) is granted only to someone who has received a booster shot or 2 vaccine doses in the last 6 months. Entry into Israel is dependent on having had the booster. Over 4,000,000 Israelis have received the third shot (booster and 500,000 have even received a 4th shot.

In the US, a third of adults have received the booster and numerous institutions (schools, colleges, hospitals) have made it mandatory.

In the UK, over half the adult population has received the booster, which is given just 3 months after the 2nd vaccine jab.

The question is why? What happened to the miracle vaccines that were meant to put an end to the pandemic and how many boosters are people going to have to take? An endless number?

There are two reasons why boosters have become necessary. It is now known that vaccine efficacy begins to wane after a few months and by six months is hardly effective at all: the  vaccines ramp up our production of antibodies, but it seems that our bodies do not tolerate such high levels and very quickly begin to get rid of them.  Secondly the vaccines were originally designed to combat the Wuhan strain and are proving ineffective against new variants such as Omicron. One could say that the boosters also do not work against Omicron, since they consist of the same vaccines as the first 2 doses. And this is effectively what we have seen. In the most boosted countries, Omicron has soared just like everywhere else. But governments still insist that boosters are necessary: they may not stop infection but they prevent severe illness and hospitalization. The trouble is that the efficacy of booster shots declines even faster than doses 1 and 2.

Take the case of Israel which was one of the countries fastest off the ground with its vaccination program which began late December 2020.  Six months after the second dose, in August 2021, it was determined that a booster was necessary to ramp up vaccine efficacy. Then in December 2021, just 4 months after the third shot (booster no. 1), the Israeli authorities determined that a 4th shot was necessary for the over 60s and at risk populations. The announcement of the 4th shot was accompanied with the usual fanfare declarations that the shot boosted antibodies fivefold etc. The over 60s rushed to get their shots and Israel’s Prime Minister, Naftali Bennett, waxed proudly:  “Israel’s trailblazing vaccine campaign has reached another milestone….thank you to the half a million Israelis who got the fourth dose of the Covid vaccine and in so doing, help to keep us all safer.”

That was on January 14. On January 17, Israel’s Sheba Medical Center released the results of the world’s first trial with Omicon, conducted on its medical staff. The trial found that the 4th shot does not provide enough protection against Omicron. This was exemplified by the case of Israel’s Finance Minister, Avigdor Lieberman. On January 10, Lieberman received his 4th shot. On January 15, he tested positive with Covid! Against Omicron, the vaccine has proved powerless.

The fact that the boosters have not helped to check the pandemic or protect people against infection should make authorities everywhere query their policy of mass vaccination and vaccine passes. There is no sense in separating the vaccinated from the unvaccinated if everyone is getting infected. And if as is claimed (but is disputable) the boosters help protect people from severe illness and hospitalizations, then taking the booster should be a personal medical decision that has nothing to do with “infecting” or “protecting” others.

In addition to the inefficacy of Covid boosters, there is the issue of the danger they pose to the health of our immune system. “There is a very basic phenomenon in immunology which is called “immunological exhaustion,” explains Dr. Hooman Noorchashm of the University of Pennsylvania. “This means that if you continuously stimulate, in short spaces of time, the immune system to hyperactivity, the B and T cells that normally respond will eventually become unresponsive and actually become tolerant to the virus.”

And not just of the virus. Geneticist Alexandra Henrion-Caude, who is a leading opponent of mass vaccination, explains how repeated boosting can threaten a person’s entire response to disease: “The more boosters you receive, the more you condition your body to respond solely via antibodies,” she says. “Once these antibodies wane, your weakened immune system will no longer be able to respond to any illness.” Well before the issue of Covid vaccines, immunologists were aware of this danger. In 2009, a Japanese study showed that repeated immunization led to the emergence of auto-immune diseases (MS, lupus, Guillain-Barre syndrome etc.).

Speaking on a recent webinar, Belgian physician, Dr. Stephane Resimont (who was fired from his position as a hospital ENT surgeon because he refused to be vaccinated) recounted that this is what he has witnessed in his private practice: “I have seen patients who were in remission from MS experience an upsurge of the disease following vaccination. The boosters change the way our body defends itself in a catastrophic way.”

Even the WHO has weighed in against the boosters warning that repeating booster doses of the original Covid vaccines is not a viable strategy against emerging variants. “No country can boost its way out of the pandemic,” declared recently WHO chief Tedros Adhanom Ghebreyesus. His view was echoed by Britain’s chief scientific advisor, Sir Patrick Vallance, who stated at the beginning of January 2022, “It is not sustainable to give COVID-19 booster shots every 3 to 6 months in the long term.” Marco Cavaleri, vaccine strategy chief of the European Medicines Agency, took this even further when he stated “repeated vaccinations within short intervals could lead to problems with the immune system.”

Even Pfizer CEO, Albert Bourla, has expressed doubt as to whether there is a need for a 4th dose. Pfizer is clearly staking its bet now less on the vaccine and more on its new antiviral drug Paxlovid which it claims reduces hospitalization or death by 89% (more on the new Covid drugs about to hit the market in a forthcoming article).

Another danger emanating from the boosters is that of the ADE (antibody dependent enhancement) phenomenon. This is when, instead of producing neutralizing antibodies, the vaccines cause us to produce antibodies that facilitate infection. New data emerging from Denmark shows that vaccine protection against Omicron not only falls quickly but even turns negative after three months. This means that a vaccinated person is more likely to contract Omicron than someone who did not get the vaccine. So either the ADE phenomenon or a weakened immune system would explain why several countries are now showing infection rates that are higher among the vaccinated than among the unvaccinated.

PrevPrevious ArticleCould a simple error in the administration of Covid vaccines explain the rise in post-vaccination heart problems?
Next ArticleIn MEMORIAM Luc Montagnier – 1932-2022Next