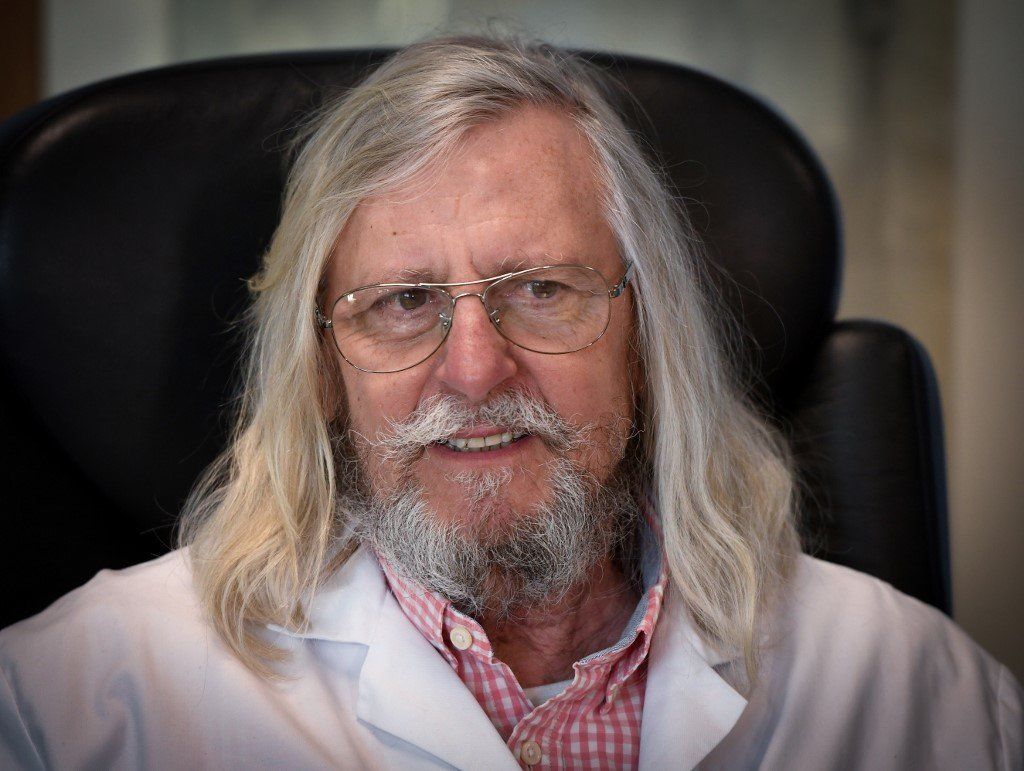 Didier Raoult is the black sheep of the French medical establishment. He is an unwelcome oddity who persists in doing his own thing, in challenging the orthodox conventions about Covid-19 and in treating patients with his own protocol. To boot he dares to broadcast his results.  Raoult gives regular video briefings in French informing the public of his work, his views and the latest data on the epidemic.  The French authorities have tried to silence him but to no avail. He continues to speak out.

Dr. Raoult’s base is Marseilles, a fitting city from where to throw down the gauntlet to the authorities in Paris.  He serves as the Director of the IHU – the Institut Hospitalier Universitaire Mediteranee Infection, which he helped to create. His credentials are impeccable. Raoult is considered one of the world’s leading experts on transmittable diseases and is the most cited microbiologist in Europe, with numerous weighty books and thousands of academic papers to his name. He even has a bacteria genus named after him – Raoultella!

Raoult became famous in Spring 2020 when the pandemic first broke out. “Hysteria began as soon as I started to speak out about the treatment I had introduced for Covid patients which was a combination of hydroxychloroquine, which the Chinese were also using, and the antibiotic azithromycin. We found that by treating patients early, we obtained good results.”

Raoult, like other colleagues, was shocked that Covid patients across France and elsewhere were not given any form of treatment but simply told to stay home. His mantra, which he keeps repeating, is that Covid 19 is a disease that can and must be treated.  “It is vital to stop spreading panic. High mortality affects primarily those with a very low life expectancy. By treating early and efficiently we can maintain a low rate of mortality.”

In December 2020 Raoult gave this end of year update:

“Of those who died, more than 80% had a life expectancy of less than 1 year. So the strategy of early detection and early treatment leads to a very low mortality rate.”

The greatest scientific scandal of the 21st century

The hysteria that followed Raoult’s declarations was acute. He received death threats, was treated as a charlatan and his treatment dubbed all kinds of names: ‘controversial’ ‘dubious’ ‘questionable’… even though hydroxychloroquine had been used for years in France, was sold over the counter and had never been called into question before.

A similar phenomenon was experienced by other doctors.  As soon as they began talking about the results they had achieved with hydroxychloroquine or other cheap drugs, pressure was exerted to silence them. At the beginning of the epidemic, Dr. Jean Jacques Erlstein, together with 2 other doctors, treated 200 patients with a combination of azithromycin and zinc. “We had no hospitalizations and no deaths.” As soon as these doctors published their results in a national newspaper, they were instructed by the medical authorities to desist from talking about the subject and cease using antibiotics. No justification was given.

It was clear that a nationwide clampdown had begun on the use of hydroxychloroquine and antibiotics to treat Covid patients. In March, GPs in France were prohibited from prescribing the drug, on the grounds that it was dangerous.

“This was the craziest thing I ever heard, says Raoult. “This drug has been around for 80 years. It is cheap (costs just $5 a dose) and is used by almost one third of the world’s population. In France it has been sold at a rate of 36 million pills a year.. and suddenly they were saying it was dangerous!”

Despite the onslaught against him, the death threats and the recent charge of charlatanism leveled at him by the Ordre des Medecins (French Medical Association), Raoult persists with his treatment and research. “To accuse me of not using a scientific approach is ridiculous. I have been extensively published, I have dozen books to my name… it’s absurd. I have been accused of charlatanism because I express a different view form that of the Ministry of Health. But this is my duty. I am paid to do research and to teach and it is my obligation to publish the results of my research.”

Oxygen:  A major sign of Covid infection is a drop in oxygen saturation. In contrast to other respiratory diseases, with Covid, the oxygen level drops before respiratory problems begin. Once these begin it can often be too late.  So if a person is infected, it is very important to watch his/her oxygen level. This can be gaged with an oximeter (bought in any pharmacy).  A level under 95 is cause for concern and requires immediate attention.

Transmission:  Unlike the current view which places the emphasis on airborne/aerosol transmission of the virus and the need to  wear masks, Raoult stresses that transmission of the virus is primarily handborn and comes from contact with contaminated surfaces. This is the case it seems with all respiratory infections. He cites a study that shows that the main points of Covid contamination are supermarket trolley handlebars and handlebars/buttons on public transport. The need to  regularly disinfect one’s hands is as important as ever.

The naval-fire battalion of Marseille has developed an original method of gathering data about the virus by analyzing trace concentrations in the city’s sewers. Their findings have been able to identify new mutations and pinpoint where the virus is increasing and where it is declining. They are also able to identify the most contaminated items. In contrast to claims that restaurants are important sources of contamination, the firemen’s  latest findings show that the most contaminated items do not come from restaurants but rather from private homes.

“This is a revolutionary method of testing,” says Raoult. “It offers us unique epidemiological data and costs much less than current methods such as testing etc.”

Lockdowns: Raoult does not believe lockdowns and social restrictions lower the mortality rate. The major factors affecting mortality, he says, are life expectancy and treatment. “I am afraid of the fear which is not justified by the numbers. The more people panic the less one treats. “

New mutations:  As an honest scientist, Raoult asserts that the only thing he is certain about is that the virus is unpredictable! “All the predictions that were made have been proved wrong. We have never seen a form of epidemic such as this one. It is not typical of a coronavirus and takes different forms in different places. The Danes reported last summer that new mutants had appeared on mink farms. This was a case of zoonosis, an infection that is transmitted from animals to humans and vice versa. When animals live in large densities this can lead to major epidemics. And mink colonies had major epidemics of the human coronavirus, perhaps transmitted to them by a worker. The Danes immediately culled their mink farms. As for the new British strain, it is very unusual because it has 1,400 mutations. Usually mutations accumulate gradually and have intermediary stages but, in this case, they appeared all in one go. Several hypotheses have been put forward regarding the origin of the new strain. Some say it could have come from a mink colony while, in Britain, some hypothesize that it came from chronically ill patients who were given plasma taken from Covid recovered patients plus the drug Remdesivir.”

Raoult is circumspect regarding the new vaccines: “No one knows what will happen when you inject genetic material into humans. When you begin to manipulate genetic material, complicated things can happen. From the start, everyone was looking for a magic wand… at first they thought it would be the drug Remdesivir, now the vaccines. Instead of putting into place a real strategy of testing and treating. We should be fighting a guerilla war, like they did in Vietnam from house to house, we need to fight from patient to patient.

I am not an anti-vaxxer but I know about vaccines. I gave a talk 10 years ago about infectious diseases and vaccines and I explained that in the last 30 years the field that devoured the most government money was that of vaccines. First they tried to find a vaccine against malaria, then against HIV… all without success. The same is still true today.  This is because these diseases are not really immunizable. The first vaccines were for diseases you get only once. Then it’s easy. When you keep getting re-infections, it becomes much more difficult. For instance, Covid has so many mutations that we are now seeing people who were infected last year getting re-infected again. The question is : will the vaccines, which are based on the first strain of the virus, continue to be effective?”