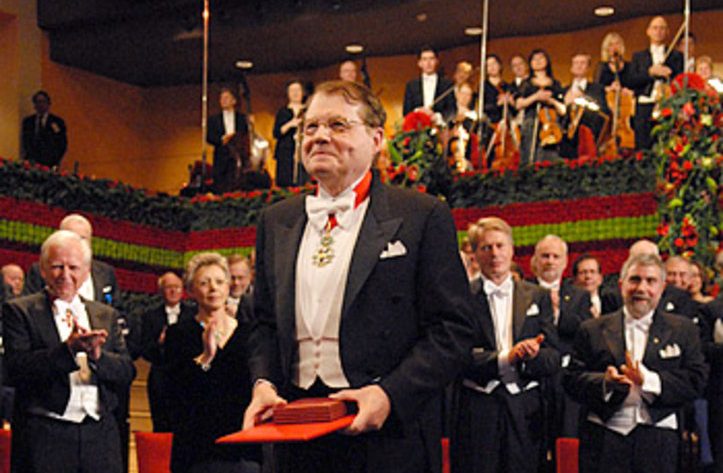 It is with immense sadness that we bid farewell to Luc Montagnier who recently passed away in Paris at the age of 89. In addition to being a renowned scientist –  he was awarded in 2008 the Nobel Prize for Medicine in medicine for his discovery of the HIV virus – Montagnier was a man of courage and principle. In homages paid to him across France, he has been described as a “visionary,” a “humanist,” and a “résistant” who was always on the front line, questioning authorities and championing truth and justice. In his late eighties, instead of a cozy retirement, Montagnier spent the last two years of his life campaigning against the mainstream narrative which was spun by governments, health officials and the media worldwide and which preached, like religious dogma, that: 1) SARS CoV-2 was a natural virus and 2) Covid vaccines were safe. Anyone who said otherwise was accused of promoting fake news. Montagnier was one of those who said otherwise. Just a month before his death, he was out on the front line, testifying about the dangers of the vaccines before members of the Luxembourg Parliament and leading an anti-vaccine mandate demonstration in Milan.

The origin of the virus

It was in April 2020 that Montagnier first set alarm bells ringing when he publicly asserted that SARS CoV-2 was not an entirely natural virus. The virus, he said, showed definitive signs of having been artificially manipulated in a lab and he asserted that it specifically contained tiny sequences of the HIV virus. If his assertion was true, it meant that the Chinese had willfully produced the new virus in their Wuhan lab and were therefore responsible for the global pandemic…..heresy of heresies! But Montagnier did not accuse the Chinese of fabricating the virus as a biological weapon or of intentionally releasing it. In his soft spoken manner, he theorized that the Chinese had probably been trying to develop an AIDS vaccine (a natural goal since an estimated 38 million people still suffer from AIDS) and the manipulated virus had accidentally leaked from their lab.

On what did he base his claim? One would imagine it took meticulous lab work to make such a discovery. But no. Instead, Montagnier used a sophisticated computational mathematical approach to compare the genetic code of the HIV virus with that of Covid-19. The aim was to determine whether long identical sequences existed in both viruses.  His theory was that if a sequence of 18 identical nucleotides were found in both viruses, this would demonstrate external manipulation since such a situation could not occur naturally. Montagnier’s analysis came up with at least 6 identical sequences of more than 18 nucleotides. In a very detailed scientific paper entitled “Covid-19, SARS and Bats Coronaviruses Genomes – Unexpected Exogenous RNA Sequences” published in May 2020, Montagnier and his co-author, Jean Claude Perez concluded that: “we have demonstrated that the Covid-19 genome contains an insertion of six strategic HIV regions concentrated in a mini-space representing less than 1% of the length of the genome. These were placed side by side with the precision of a watchmaker.”

Predictably, Montagnier was lambasted and vilified for his claim. The entire scientific community locked arms against him and accused him of spouting nonsense. Of course, the virus was natural, they screamed while the big guns were brought out to silence him: he was censored by YouTube, accused by Google fact-checkers of propagating ‘false’ information, ostracized by the media and generally disparaged as a doddering old fool. “There is enormous pressure to silence everything related to the origins of the virus,” Montagnier lamented in a TV interview. “It’s a blackout.” But he continued to speak out. Unlike the majority of his colleagues, Montagnier was free to speak his mind.  Since he was not part of the system and did not fear loss of income, career or prestige, he did not have to kowtow to anyone or succumb to the prevailing “scientific climate of terror.”

He made his assertions in a quiet, gentle manner but with the confidence of someone who knew what he was talking about. Nor did he try to sow panic. He reassured the public that, even though the alleged manipulation of the virus could make it more contagious, it would also make it less lethal. Nature, he said, does not like artificially inserted external elements and, as such, he predicted that the virus would mutate in order to get rid of the artificial HIV fragments and the process of mutation would weaken it. This is, indeed, what happened: from Alpha to Delta to Omicron, Covid-19 has got weaker over time.

And, in a major turnaround, what was considered heresy two years ago – namely Montagnier’s assertion that the Covid virus leaked out from the Wuhan lab – is now regarded by the scientific community and the media as “highly plausible!” The connection with HIV has yet to be corroborated.

Early on in the epidemic, before the Covid vaccines were rolled out and before any side effects were noted, Luc Montagnier warned: “These new type of vaccines may have totally unpredictable consequences. Human beings should not be used as guinea pigs.” He did not accept the comfortable assurances given to the public that the vaccines were “totally safe.” He called for more extensive trials and a halt to mass vaccination. He was particularly troubled at the idea of injecting children with ‘experimental’ vaccines. He said it was “irresponsible” to put children at risk and the side effects of the vaccines could affect not only the youth of today but also future generations.

But even Montagnier was surprised at the extent and rapidity with which serious side effects such as myocarditis and neurological problems emerged following vaccination. “We expected something like this might happen but not so quickly,” he said. “Barely a year has elapsed since the first vaccinations and we are already seeing severe neurological side effects.”

Recently, in an opinion piece co-authored with Yale law professor Jed Rubenfeld and published in the Wall Street Journal (“Omicron Makes Biden’s Mandates Obsolete”) Montagnier criticized vaccine mandates, stating: “It would be irrational, legally indefensible and contrary to public interest for a government to mandate vaccines absent any evidence that the vaccines are effective in stopping the spread of the pathogen they target.” In fact, not only have the vaccines been unable to prevent the Omicron surge, research cited by Montagnier in the article has shown that, after 90 days, the vaccines begin to have a negative effect – meaning that, at this point, vaccinated people are more susceptible to Omicron than the unvaccinated.

In the long term, Montagnier worried about the risk of the RNA from the vaccines integrating into the human genome. Albeit a rare phenomenon, it could not be excluded, he said, adding that “faced with an unpredictable future it is best to be cautious and abstain.”

In 1982, as AIDS was beginning to spread in the West, Montagnier was asked to examine a lymph node taken from a young man suffering from an unknown syndrome. An expert in retroviruses, Montagnier and his team at the Pasteur Institute quickly identified the HIV virus and published their findings in 1983. Concurrently, Robert Gallo was pursuing the same line of research in the US and came up with similar findings. Which man was the first to discover the virus became the subject of a heated dispute between the two scientists and, subsequently, between France and the US. Various investigations concluded that the virus sample used by Gallo was the very one which Montagnier had sent him and Gallo was accused of misappropriation. He was, however, credited with discovering that the HIV virus caused AIDS. A compromise was reached when the French and US governments agreed to split rights to the HIV blood test patent which named Montagnier and Gallo as co-discoverers. Nevertheless, in 2008, he Nobel Committee awarded the prize in medicine to Montagnier and his team stating that it had no doubt “as to who had made the fundamental discoveries” concerning HIV.

Ever a gentleman, Montagnier expressed regret that Gallo had been overlooked by the committee: “It was important to prove that HIV was the cause of AIDS and Gallo played a very important role in that. I am very sorry for Robert Gallo.”

In 1984, at the height of the AIDS epidemic, Montagnier was asked what measures should be taken to protect people against AIDS. He replied: “I am opposed to coercive measures to stop the epidemic and to isolating the sick like lepers. Such measures will not work.

I believe in persuading people and trusting people to be responsible. It is important to inform the public how the virus is transmitted and how it can be avoided. At the same time utmost effort must be invested in research on therapeutic solutions.”

“Luc Montagnier did not discover HIV by chance. He had been working for years on a bold hypothesis that challenged the central dogma of molecular biology which held that RNA cannot transform into DNA – a dogma that is still taught today in medical schools. Basing himself on the work of scientists before him who had demonstrated that reverse transcription could indeed happen – meaning that RNA could integrate into DNA – Montagnier pursued this field and became an expert in retroviruses. He established the Viral Oncology Unit at the Pasteur Institute and it is this that enabled the discovery of the HIV virus. We must recognize that, with his discovery of HIV, Montagnier made the biggest discovery of the 20th century in terms of public health.”

Journalist Jean Robin: “Although he was vilified in his lifetime by the scientific community, Montagnier will leave a lasting legacy and will be an icon for many. He saved France’s reputation because France was also partly responsible for the pandemic since it built China’s Wuhan lab in 2004 and transferred to the Chinese the sophisticated gain of function technology that enabled them to ‘create’ SARS-CoV2. Montagnier redeemed France with his quest for the truth and his courage in speaking out.”