THE MEDICAL SCANDAL OF THE CENTURY 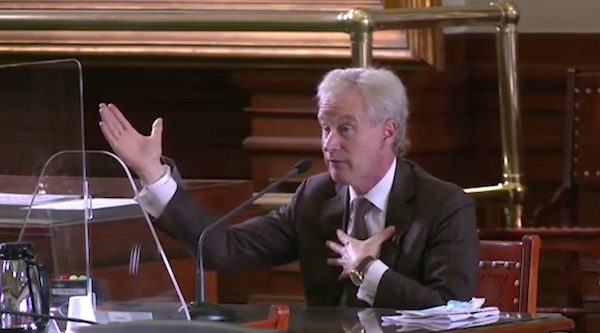 In March of this year, Dr. Peter McCullough testified before the Texas Senate and made a searing condemnation of the way the US health authorities have handled the Covid pandemic. He cited the typical Covid patient experience: the patient is handed a positive test result and, even if at high risk (obese or with pre-existing medical conditions), told to go home and sit there until his symptoms pass, or get worse. In the eventuality that they get worse, the patient is hospitalized, placed in isolation and often never sees his family again. “I cannot think of a more horrific way to handle a pandemic,” said Dr. McCullough.

The right way of dealing with the pandemic, he said, is to focus on early ambulatory treatment, particularly for patients over 50 with medical issues. He estimated that, had doctors used such a treatment, 85% of all hospitalizations would have been spared.

In his call for early Covid treatment, Dr. McCullough echoes the approach of Dr. Didier Raoult in France and is joined by a small band of other fearless doctors in the US such as Dr. Vladimir Zelenko, Dr. Pierre Kory and Dr. Harvey Risch. McCullough himself comes with robust credentials. He serves as Prof. of Medicine at the Texas A&M University and Vice Chief of Internal Medicine at Baylor University Medical Center in Dallas. And he is the most published scientist in his field of cardio-renal disease.Since the eruption of the epidemic, he has devoted himself to combatting Covid and championing early treatment.

“Unlike Ebola, Covid has a long phase of illness before it becomes serious. This is around two weeks which gives us a large window of opportunity to halt the disease. But there is nothing in the media on this or little research,” he noted in his testimony. Working with cheap available drugs McCullough  developed an early treatment protocol based on Vitamin D, C, zinc, quercetin and hydroxychloroquine or ivermectin. In conjunction with other scientists in the US and Europe, he published a paper on their findings entitled “Pathophysiological Basis and Clinical Rationale for Early Ambulatory Treatment for Covid 19” (Aug 6, 2020). “We felt that if we did not do something before hospitalization, we would never get the mortality rate down,” says McCullough. The paper went viral.  “At that time, there were 50,000 papers in peer-reviewed literature on Covid but not a single one told doctors how to treat patients. So our paper drew a lot of interest.”  So much so that McCullough was persuaded to put up a video on YouTube based on the paper. Within a week, the video was taken down by YouTube “for violating the terms of its community.”

“It was unbelievable that social media would strike down important scientific information.” (And it continues to do so, see box below).

At the same time the US health authorities began a clampdown on the use of hydroxychloroquine to treat Covid patients. The FDA declared that “giving hydroxychloroquine to a Covid patient has no clinical effect and may be harmful to the patient.” This, despite numerous studies showing the effectiveness of the drug when administered early and in conjunction with other drugs such as azithromycin.

The question is – why was there a clampdown on drugs such as hydroxychloroquine and why a total information block and censoring of early Covid treatments?

McCullough explains how he understands what may go down as the medical scandal of the century.

“The turnaround began around April 2020. This is when it became known that the virus was amenable to a vaccine, and suddenly the entire medical focus shifted to vaccines. At the same time, therapeutics such as Remdesivir (which proved a total fiasco) were being pushed by big pharma. And, finally, the fact that the government announced that it would pay for all Covid hospitalizations, gave a great incentive to encourage, rather than prevent, hospitalizations.”

The big guns had done their work effectively. Never before had such an array of clout – big pharma/governmental institutions/medical organizations/academic journals/the press/and social media – joined forces to crush the little fellow, in this case, hydroxychloroquine and other early Covid treatments whose cost is negligible and therefore of little profit to the pharmaceutical companies.

The clampdown even included putting a gag order on doctors. “That was unprecedented,” says McCullough. He points out that the situation in Canada and Australia is even worse. “In Canada no early treatment (not even the antibiotic azithromycin) is permitted and, in Australia, a doctor who tries to treat Covid patients with hydroxychloroquine can be put in jail.”

Sadly the focus was placed entirely on vaccines (which made billions for big pharma and whose efficacy is now in doubt: the latest data shows that 60% of hospitalized Covid patients in the UK & Israel were fully vaccinated) or on expensive drugs like Remdesivir which do not work.

According to McCullough, the only organization in the US which offered information about early treatment was the American Association of Physicians and Surgeons (branded in the press as a right-wing organization that pushes fringe views!). The AAPS even went so far as to sue the FDA to end its arbitrary restrictions on hydroxychloroquine. McCullough points out that “shockingly” the guidelines of the National Institute of Health state that “Covid patients should get no treatment before hospitalization but should be sent home and wait till they get sick.”

“I think these guidelines will do down in medical history as the most nihilistic, the most cruel and inhumane set of guidelines ever given.”

According to McCullough, all the patients who were hospitalized or died in the US received no home treatment.

Within a couple of days of McCullough’s testimony, the Texas Senate passed legislation mandating that information on early treatment be provided to every Covid patient.

PrevPrevious ArticleIsrael’s hottest problem: is co-existence possible between Jews and Arabs in Israel?
Next Article“The vaccinated are going to be more vulnerable than the unvaccinated”Next